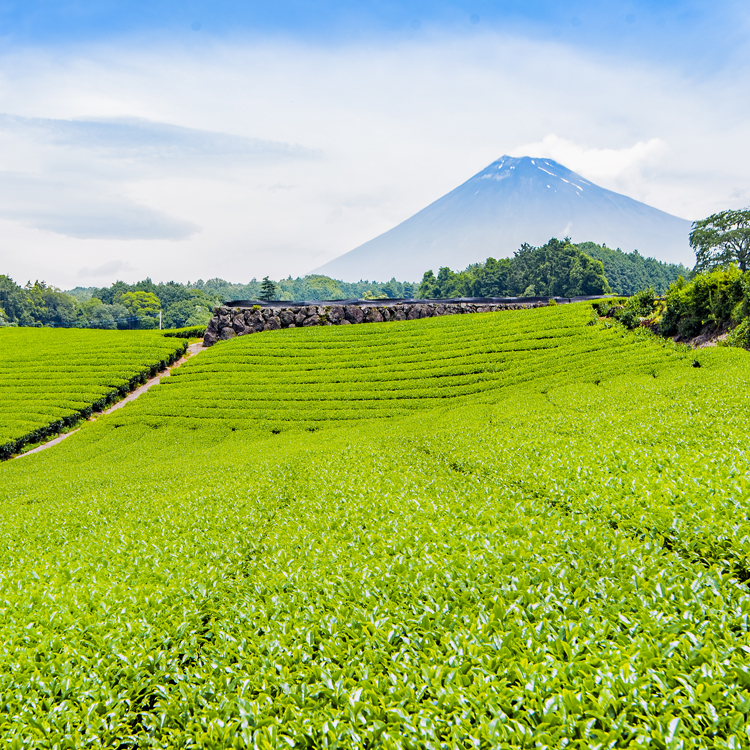 Additionally, flavors and fragrances can be broken down into 4 categories.

Distribution of the Flavors and Fragrances of Japanese Tea

Why is tea divided between light and deep steaming?

These processes are unique to the places where the tea originates.
Light steam tea is mainly produced in the mountains. The land on the mountains is bedrock and most of it is sloped, so fertilizers wash away and are not as effective. The light from the sun also gets blocked off by the surrounding trees, so the plants spend less time in the sun. This makes the tea leaves thin and fragile. The short steaming process condenses the aroma of the leaves. The light steamed tea from the mountains gives off the natural fragrance of the tea itself.
On the other end of the spectrum, deep steamed tea is made primarily on flat, open land. In flat open fields, fertilizers are much more effective, and the plants get more time in the sun. The tea leaves grow plump and have a savory taste. When the leaves are kneaded they remain thick, and as a result the tea does not look very appealing. Steaming the tea leaves longer shrinks the leaves and brings out their savory taste. As the larger leaves hold more chlorophyll, this process turns the water green. The savory leaves contain more nitrogen, which also affects the fragrance and gives them an ionone and indole aroma. The longer steaming process helps to eliminate these aromas. As a result, the teas lose their natural smell. This process leaves deep steamed tea with a rich flavor but only a light fragrance.

The higher the roasting temperature, the stronger the tea’s aroma. When tea is roasted at low temperatures or the roasting process is skipped, the tea has a fresh, almost bamboo-like aroma. Each type of unrefined (pre-roast) tea is examined and the best fragrance is chosen.

Savory flavor is a trait specific to Japanese tea. In many other countries, sugar or milk is added to black tea because the tea doesn’t have savory flavor. Black tea offers the astringency and bitterness. Chinese teas are mostly green teas fired in hot pans or fermented teas. Chinese teas emphasize aromas over flavors. Teas like Sencha and Gyokuro, which are enjoyed for their savory taste, are rare around the world.

The Importance of Blending

Generally, Japanese tea is made from a blend of light and deep steamed tea. This blend offers a better balance of both fragrance and flavor. Deep steam teas are difficult to roast alone, as over-roasting can give the water a muddy color. Conversely, light steam tea can be roasted quite strongly without affecting the water color. Blending light and deep steam teas balances the pleasant appearance, fragrance and savory taste.
You enjoy the aroma of coffee while you drink it, but the aroma of Japanese tea rises to your nose after you taste it. Your tongue enjoys the savory flavor of the tea first, and then the aroma rises from the back of your throat. If either the taste or the fragrance is lacking, this delicate balance is lost. A blend that matches the savory taste with the aroma is key in Japanese tea.